While nowadays it’s hard to imagine a house without houseplant aroids such as Epipremnum, Anthurium and Monstera, these aroids are native to the tropics and were only introduced halfway through the 19th century. Originally, a large number of native aroids are found in Europe, something which is often overlooked by indoor aroid growers. Most of these can be cultivated rather easily outdoors, in a cold frame or an alpine house. Most of these aroids are seasonally dormant.

The eight genera and approximately 80 species of seasonally dormant aroids occurring from Macaronesia and N Africa through continental Europe and the Mediterranean, the Middle East into Anatolia, and into Central Asia are among the most popular of the cultivated temperate aroids. In nature many grow in well-drained neutral pH reddish clayey soils derived from degraded limestone. A majority of the species in the Mediterranean occur in rocky scrub (variously termed garrigue, phrygana, or tomillares), less frequently in shrubby vegetation (macchia, maquis or matorral), often in the shelter of rocks and with the tuber deeply buried beneath the surrounding rocks and not infrequently misshapen. Species in Anatolia and Central Asia often occur along the margins of, or in fallow, fields to which, while obviously an artificial habitat, they appear well-adapted since the tubers are deeply buried by the activity of seasonally-produced contractile roots and thus safe from the ploughing damage. The species from more northerly habitats are associated with deciduous or semi-deciduous woodland. A few of the more specialized habitats are detailed individual pages of genera,

Most species are seemingly amenable to cultivation in pots, although the large growing species such as Dracunculus vulgaris, and those with a colonial habit owing to the horizontally-creeping elongated rhizomes, especially the larger-growing of these, require rather impracticably large containers and thus wherever possible should be grown in the open ground. In general pots should be deep comparable to their width to accommodate the tubers’ contractile roots that serve to pull the tuber into the ground to a seemingly optimum depth. A too-shallow pot runs the risk of the tuber reaching the base of the pot during the growing season and being deformed and damaged when re-potting is attempted. Although fired clay pots are often recommended most species grow perfectly well in plastic pots so long as they have sufficient drainage holes. Avoid the temptation to add ‘drainage’ in the base of the pot – all this does is reduce the volume of the growing medium. Provided the growing medium is suitable there is no need to add ‘drainage’ to the pot. There is also no need to top the growing medium with a few cm of gravel to drain the ‘neck’ of the plant. Again, assuming that the growing medium is suitable and that watering is undertaken correctly there is no worry of rotting.

All species should be repotted every year towards the end the dormant season. A good general mix is coarsely-sieved loamy soil with about 20% added humus and 10% grit (particle size 1-3 mm). If the loam is of poor quality the humus and grit can be increased to 30% and 15% respectively, although that should be the maximum since with a few exceptions the species under consideration do not prosper in a high-organic matter mix. A balanced control-release fertilizer should be added at the maximum rate recommended by the manufacturer. Fill the pots to slightly more than half their depth and set the tubers in place with the growing point uppermost for flat discoid tubers (e.g., Biarum, Dracunculus, etc), or with the tuber on its side with the growing point pointing upwards (most Arum), or lay the rhizomes flat again with the growing point facing upwards (colonial Arum, Arisarum). There is no need to set the tubers on a layer of sand. The number of tubers per pot is of course a matter of common sense, but in general for all but the largest and smallest growing species three tubers to a 20cm diam. pot is about right. Once the tubers are in place fill the pots to a couple of cm from the rim and tap the pot a couple of times on the bench to settle the medium, topping up again if it settles too much. The growing medium used should be damp, but not wet. After planting do not water immediately but instead leave it for a few days and the lightly dampen the surface. All being well the new growths will emerge in about two weeks at which time watering can be gradually increased. 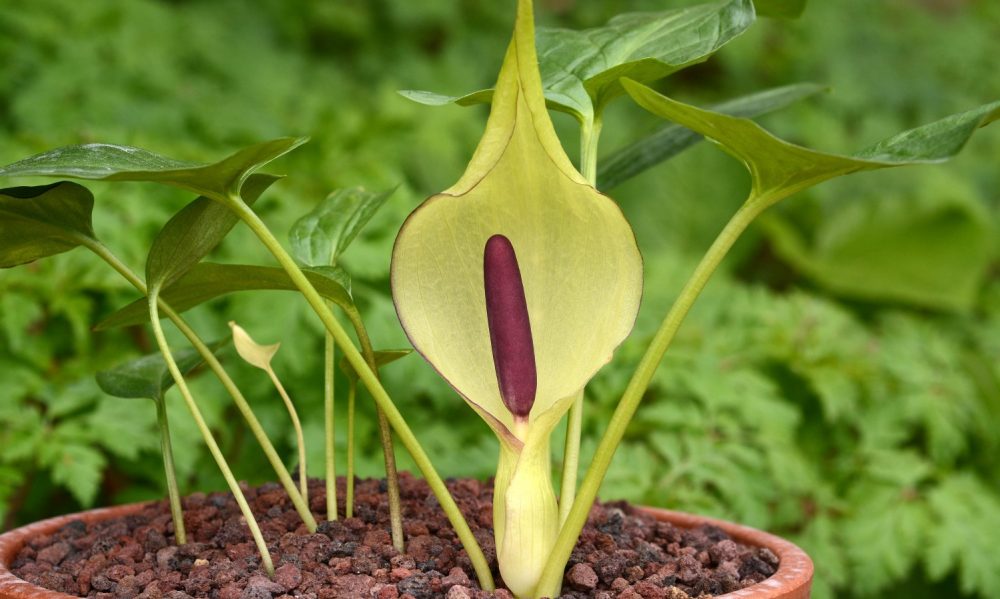 Once growth is well under way, or in the case of species that flower before the foliage emerges (most Biarum, Gymnomesium pictum) the blooms have begun to fade and the foliage development is advanced, a weekly liquid feed is beneficial. A fertilizer suitable for flowering ‘houseplants’ or tomatoes will serve well. It is important to keep plants growing as long as possible since the longer the growing season the larger and/or more numerous the tubers at the end. To this end, plants in pots should not be allowed to dry out at any time, especially in the later part of the growing period. Once fully matured foliage is allowed to wilt by becoming too dry it will seldom recover and will soon begin to yellow and wither. All the species require good light, although if under glass care must be taken that the leaves do not become excessively hot. In general, it is better to have all the pots standing outside in a sheltered but not too shady position for the growing season.

When the foliage begins to die down it is important to considerably cut-back on watering. If the weather is wet at this time the pots should be moved under cover and allowed to dry out and the foliage allowed to dry-off completely. For most species watering can be withheld totally from now on – here an advantage of the deep pots becomes evident in that the lower parts of the growing medium will remain slightly damp for weeks after watering is ceased, even if the upper layers become bone dry. This closely mimics the situation in the wild wherein even at the height of summer residual moisture remains in the soil around the now-dormant tubers. Once plants are dormant it is important to resist the temptation to tip out the pots and inspect the tubers. Repotting just-dormant tubers into fresh medium runs a considerable risk of them desiccating long before the new growth emerges and new roots develop. It is much preferable to leave the tubers to rest in the current seasons growing medium and to repot just prior to the expected re-start of growth.

Open ground cultivation is preferable wherever possible, although certain genera such as Ambrosina and Eminium, most of the Biarum and Dracunculus canariensis need frost-free conditions. Ordinary garden soil is suitable, although if it is heavy/clayey and drains poorly, it should be improved with the addition of sharp grit and humus. In really unfavourable situations a raised bed is an answer, although in time these can compact badly and require periodic renewal. One advantage they offer is that they can be provided with a glass cover to enable them to dry properly in the dormant season, although oddly enough it appears that in the open ground aroids are less affected by failing to ensure a fully dry rest than they are in pots. Except for the woodland species of Arum (e.g., A. maculatum, A. megobrebi, etc.) the position selected should be as sunny as possible and preferably sheltered from strong winds which can seriously damage the foliage. It is a good idea to plant the tubers beneath low shrubs such as Helianthemum, the smaller Cistus, lower growing Genista, etc. The roots of these plants will utilize excess moisture when the tubers are dormant, and also provide some support to the aroid foliage. 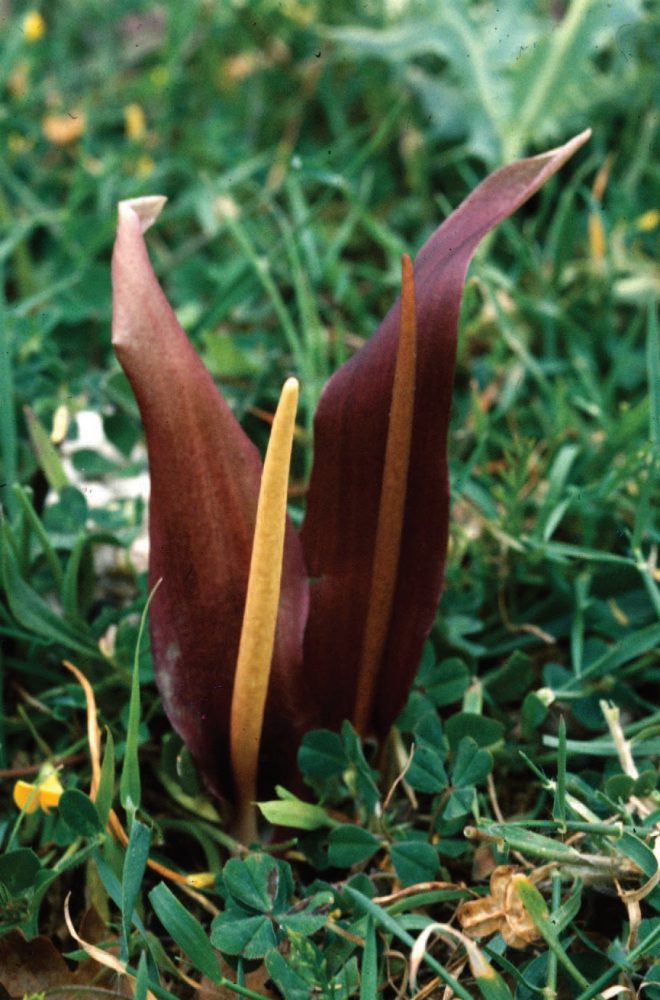 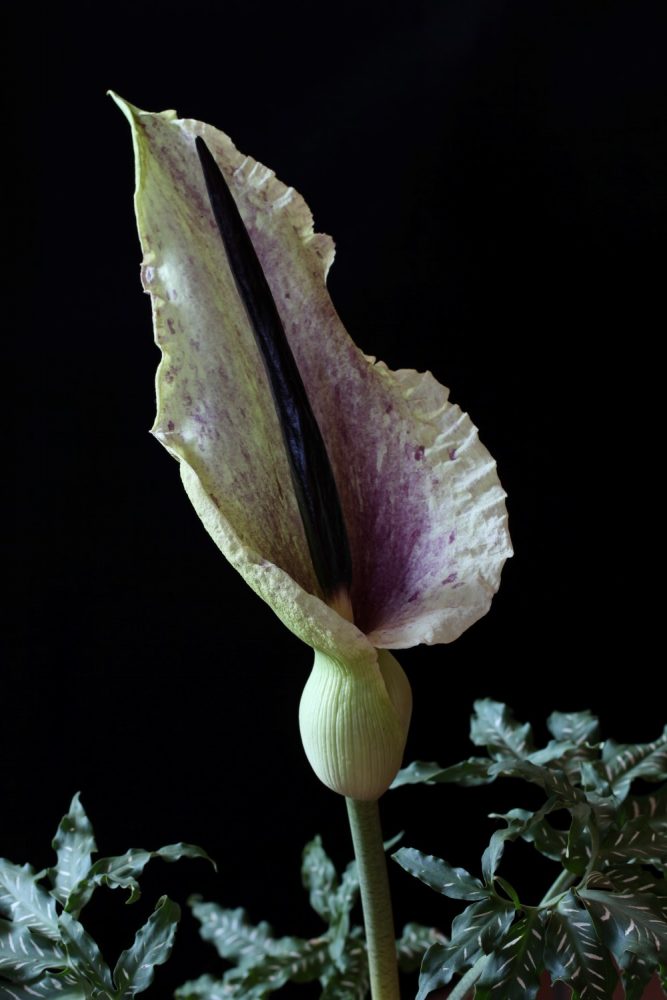 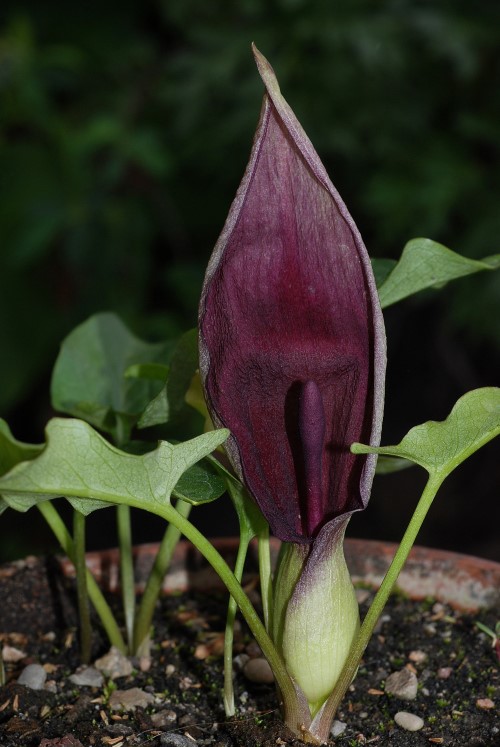 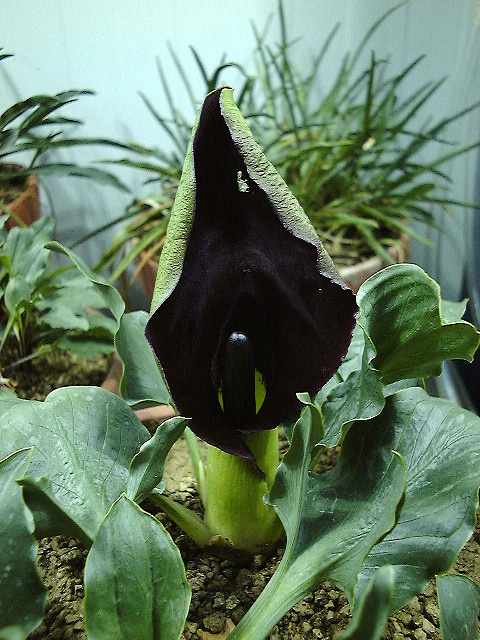 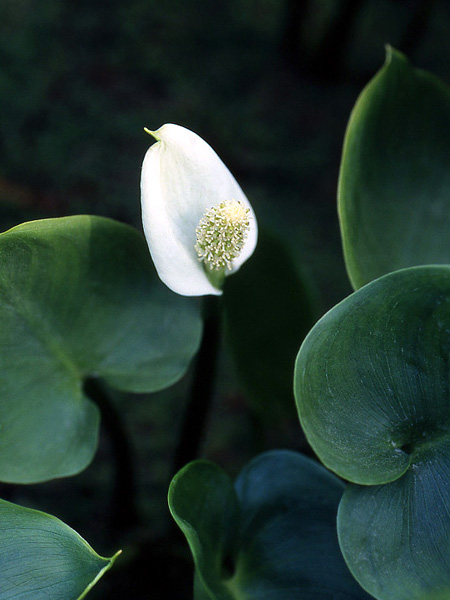 Calla palustris L., a historical aroid with mentions as far back as Pliny the Elder 50 AD. It is known as "snake root" due to Pliny writing about its roots, when mixed with water or wine, should help against snake bites. 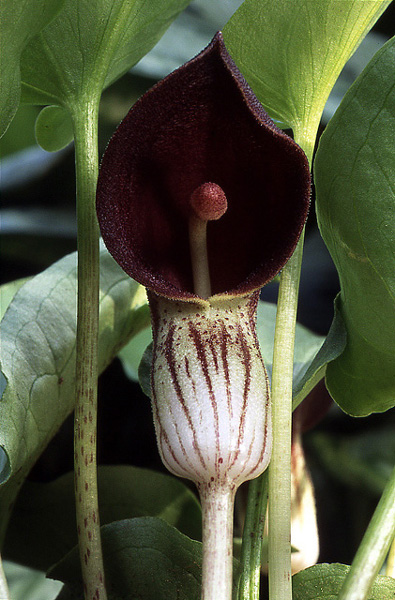 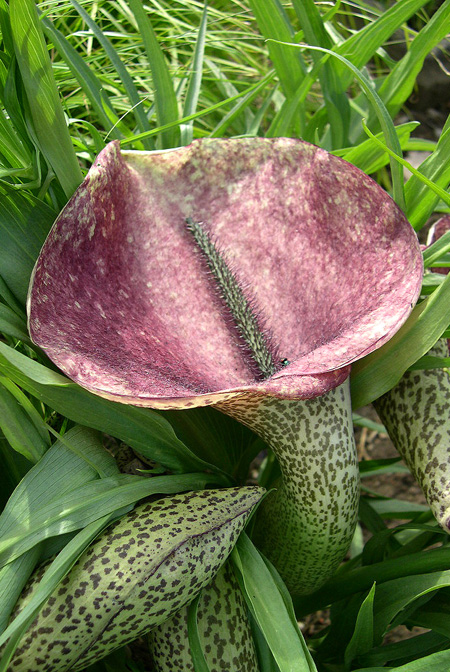